Bangladesh O Bishoporichoy Suggestion and Question Patterns of JSC Examination 2015. Bangladesh, officially the People’s Republic of Bangladesh is a country in South Asia, located on the fertile Bengal delta. It is bordered by the Republic of India to its north, west and east, by the Union of Myanmar (Burma) to its south-east and by the Bay of Bengal to its south. It is separated from the Democratic Republic of Nepal and the Kingdom of Bhutan by the narrow Indian Siliguri Corridor. Together with the neighbouring Indian state of West Bengal, it makes up the ethnolinguistic region of Bengal. The name Bangladesh means “Country of Bengal” in the official Bengali language. 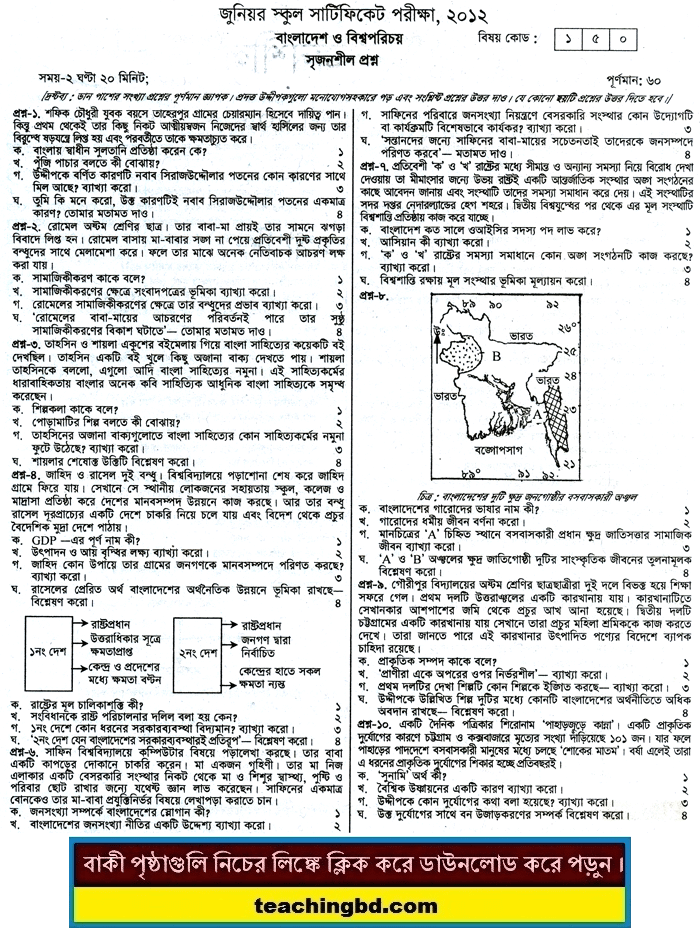 The borders of modern Bangladesh took shape during the Partition of Bengal and British India in 1947 when the region became the eastern wing of the newly formed state of Pakistan. Due to political exclusion, ethnic and linguistic discrimination, and economic neglect by the politically dominant western wing, a combination of popular agitation, nationalism and civil disobedience led to the Bangladesh Liberation War in 1971 which resulted in the separation and Independence of the region from Pakistan and the formation of an independent Bangladesh. After independence, the new state proclaimed a secular multiparty democracy. The country endured decades of poverty, famine, political turmoil and numerous military coups. The restoration of democracy in 1991 was followed by a period of relative calm and economic progress although the country’s main political parties remain bitterly polarized.

Bangladesh is a parliamentary republic with an elected parliament called the Jatiyo Sangshad. With a population of more than 160 million people in a territory of 56,977 m2, Bangladesh is the world’s eighth most populous country, as well as one of the world’s most densely populated countries. The Bengalis from the country’s predominant ethnic group, whereas the indigenous peoples in northern and southeastern districts form a significant and diverse ethnic minority. The Bengal delta region has a rich and diverse cultural heritage. The four largest religions in the country are Islam (89%), Hinduism (9%), Buddhism (1%) and Christianity (0.5%).